Setting up Arduino IDE 1.0 and 1.6 for ATtiny and Manchester library

I am currently working on a project where I want to deploy small battery powered ATtiny based modules to track a few things and to communicate back to an Arduino or Raspberry PI.

While I was first trying to use the Virtual Wire library, I found out it couldn't handle the ATtiny85 that I was operating at 1 MHz. The reason for this is that it has a different timing from chips that run at regular speeds, like the Arduino itself.

Luckily there is an alternative in form of the Manchester Encoding library for Arduino. It works not just with the typical Arduino chips but also with various ATtiny variants. The only problem was that my Arduino IDE setup I had in place did not work with this library. In the following I will outline what the issue was and how I got around fixing it.

When I started out coding for the ATtiny85 I used sparkfun's excellent tutorial on how to set-up the Arduino environment to compile and upload ATtiny programs. At one point you need to install the hardware specs and code for the ATtiny family. Sparkfun and other places recommended David A. Mellis' repository, which I downloaded and which worked fine for the blink tutorial and a few simple projects. Even Virtual Wire was no problem with this setup.

As I mentioned in the beginning, I had to switch over to the Manchester encoding library. And when I did I got a bunch of error messages about symbols not being found:

Through a post on Stack Exchange I found an alternative library for supporting the ATtiny hardware specs that seems more complete than the one I used before. It's called arduino-tiny and can be found on Google Code at the moment (though it might move since Google Code is in the process of shutting down).

Installing arduino-tiny in the Arduino IDE 1.0 was easy, but I had a few issues with Arduino 1.6 - though I eventually got it to work as well. I've done this on Windows but there shouldn't be a difference for doing this on other platforms.

With Arduino 1.5/1.6 they seem to have changed a bit about where the compilers live and how the hardware specs have to be defined. Luckily the arduino-tiny site has an archive for Arduino 1.5 which already has the specs changed to be compatible. However, I couldn't get it to work with the IDE after following the steps I outline for Arduino IDE 1.0 above. When I did this I got an error when I tried to compile saying that the IDE couldn't find the compiler:

Third-party platform.txt does not define compiler.path. Please report this to the third-party hardware maintainer.

After looking at the Arduino 1.6 file structure I was surprised to not find the compilers and linkers in the tools directory. In fact I couldn't find them anywhere at first. After some digging around I finally found them in a zip archive under .../Arduino/dist/default_package.zip.

When I tried to Google about it I couldn't find much information, and maybe there is a better way to achieve what I want, but in the end I got it to work by unzipping parts of the archive to make the compiler accessible. Here is the full list of steps I needed to perform in order to compile for the ATtiny with the new Arduino 1.6 and the arduino-tiny hardware specs:

I hope this post helps some folks to get set-up with their ATtiny and some more advanced libraries like the Manchester encoding library. I have the feeling that there might be an easier way to get the arduino-tiny hardware spec to work with Arduino IDE 1.6. If you know how to get around extracting the AVR compiler, please reach out and I will update this tutorial.

But in any way, I am glad I was able to unblock my wireless project which is using an ATtiny85 to transmit data using a 433MHz transmitter to an Arduino which has a receiver. I will create another article about this little project, but didn't want to spam it with these library and set-up issues.

electricbiscuit said…
many thanks for this tutorial sasha! I've been looking for a solution for Manchester lib to work for my 85s... for quite a while. Many thanks!
9:34 AM

bogdan said…
what HW/SW do you plan to use for the RPi gateway?
9:36 AM

Edwin said…
Interesting. I initially had some problems with the 'tiny' core you describe. Under 1.0.6 couldnt get my Manchester working. Only when I updated to the 'attiny' core did it work.
However... when I updated to 1.6.3... again problems with manchester.. can't find various timer related registers:
TCCR2A
TCCR2B
OCR2A
TIMSK2
TCNT2
all 'not declared in this scope'
No doubt this is because of the different file structure under 1.6.
oddly, during compile it can find my manchester core, but then it goes wrong.
I will study your solution a bit more because I am sure the answer is in there somewhere for the attiny core as you found for the tiny core
11:29 AM

Edwin said…
Interesting article. I got Manchester working on 1.0.6 without much ado, however it does give a bunch of timer2 related errors on 1.6.3
as the core is the same (I guess), both being from MIT, I presume the error must be somewhere in the way the various core files are nested. Also, somewhere along the line I have installed a specific Attint45-85 related manchestercore. Maybe I need to bring that into the new structure as well
6:34 AM

Sascha said…
@bodgan: I am currently working on my own software stack. You can follow my sevelopment here:
https://github.com/shaeberling/winston

But it's still very early.

@Edwin: Yeah they changes the structure between 1.0 and 1.6 which also gave me these headaches. This is why I wanted to document my solution in this blog post since I knew I and others would run into this problem.
12:56 AM

Unknown said…
Was getting all these same errors with IDE 1.6.5. I think they fixed the issue with the default package.zip because I couldn't find that anywhere. Brought the tiny library into C:\Users\(username)\Documents\Arduino\hardware then renamed tiny/avr/Prospective Boards.txt to Boards.txt and all the options showed up in the Boards dropdown...voila! didn't even have to rename the compiler path.
4:35 AM

Popular posts from this blog

Installing DD-WRT on the Linksys EA2700 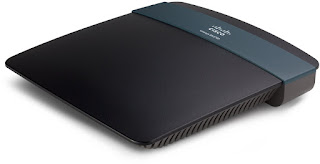 So I had this router for quite a while. I bought the EA2700 when I moved to the US, without doing much research. That was a mistake. I had a bunch of the famous WRT54GL routers before and was super happy with them, mainly due to the flexibility of installing an alternative OS on it, which unleashes a lot more power and functionality. However, the WRT54GL was just too dated in 2012, so I decided to get a newer model and got the Linksys Cisco EA2700. I don't want to go into too many details, but this was a pretty bad decision. The software is just really bad. Almost no functionality and on top they tried to put some 'cloud-connection' stuff that is not only unnecessary, but counter productive. They tried to market it as a "Smart Router".  A bit later I bought myself a TP-Link  TL-WR1043ND  and have been using it ever since. However,  today I found the (now old) EA2700 in a moving box. This inspired me to check the interwebs for the current status of DD
Read more

Backing up a NAS to CrashPlan using a Raspberry Pi 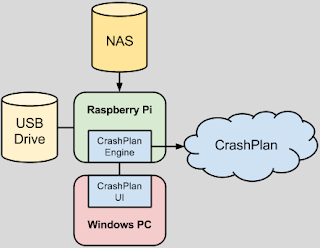 [Update on July 28th 2006] I have updated the post to reflect that CrashPlan 4.7.0 still works the same way as well as adding instructions for running the UI on MacOS/OSX Motivation I currently have a Synology DS212 (discontinued, but similar to more current  DS213 ), which works fine, but I wanted to have another backup of the data on it off-site, meaning not in my house. A few years ago I got myself a CrashPlan subscription and have since used to to back up my personal and my families data from multiple machines. Ideally I would like to run the CrashPlan software on my NAS, but the DS212 is not powerful enough to handle the Java-based CrashPlan client. Since I anyway already have a Raspberry Pi 2 Model B set up as a home server (I am running a custom home automation server and some other servers on it), I thought it would be great to add the CrashPlan client to it. Getting the CrashPlan headless client running on a Raspberry Pi is luckily possible, but there are a few issu
Read more